LunarLander is one of the learning environments in OpenAI Gym. I have actually tried to solve this learning problem using Deep Q-Learning which I have successfully used to train the CartPole environment in OpenAI Gym and the Flappy Bird game. However, I was not able to get good training performance in a reasonable amount of episodes. The lunarlander controlled by AI only learned how to steadily float in the air but was not able to successfully land within the time requested.

Here I am going to tackle this LunarLander problem using a new algorithm called “REINFORCE” or “Monte Carlo Policy Gradient”.

The algorithm from Sutton Book draft

The algorithm from Silver Courseware

The main neural network in Deep REINFORCE Class, which is called the policy network, takes the observation as input and outputs the softmax probability for all actions available.

This algorithm is very conceptually simple. However, I got stuck for a while when I first tried to implement it on my computer. We have got used to using deep learning libraries, such as TensorFlow, to calculate derivatives for convenience. The TensorFlow allows us to optimize the parameters in the neural network by minimizing some loss functions. However, from the REINFORCE algorithm, it seems that we have to manually calculate the derivatives and optimize the parameters through iterations.

One of way to overcome this is to construct a loss function whose minimization derivative udpate is exactly the same as the one in the algorithm. One simple loss function could be \( -\log{\pi}(A_t \mid S_t,\theta) \times v_t \). Note that \( -\log{\pi}(A_t \mid S_t,\theta) \) is the cross entropy of softmaxed action prediction and labeled action.

This algorithm did solve the problem as OpenAI Gym requested. However, it suffered from a high variance problem. I tried to tune the hyperparameters and change the size of the neural network. But this did not help significantly. 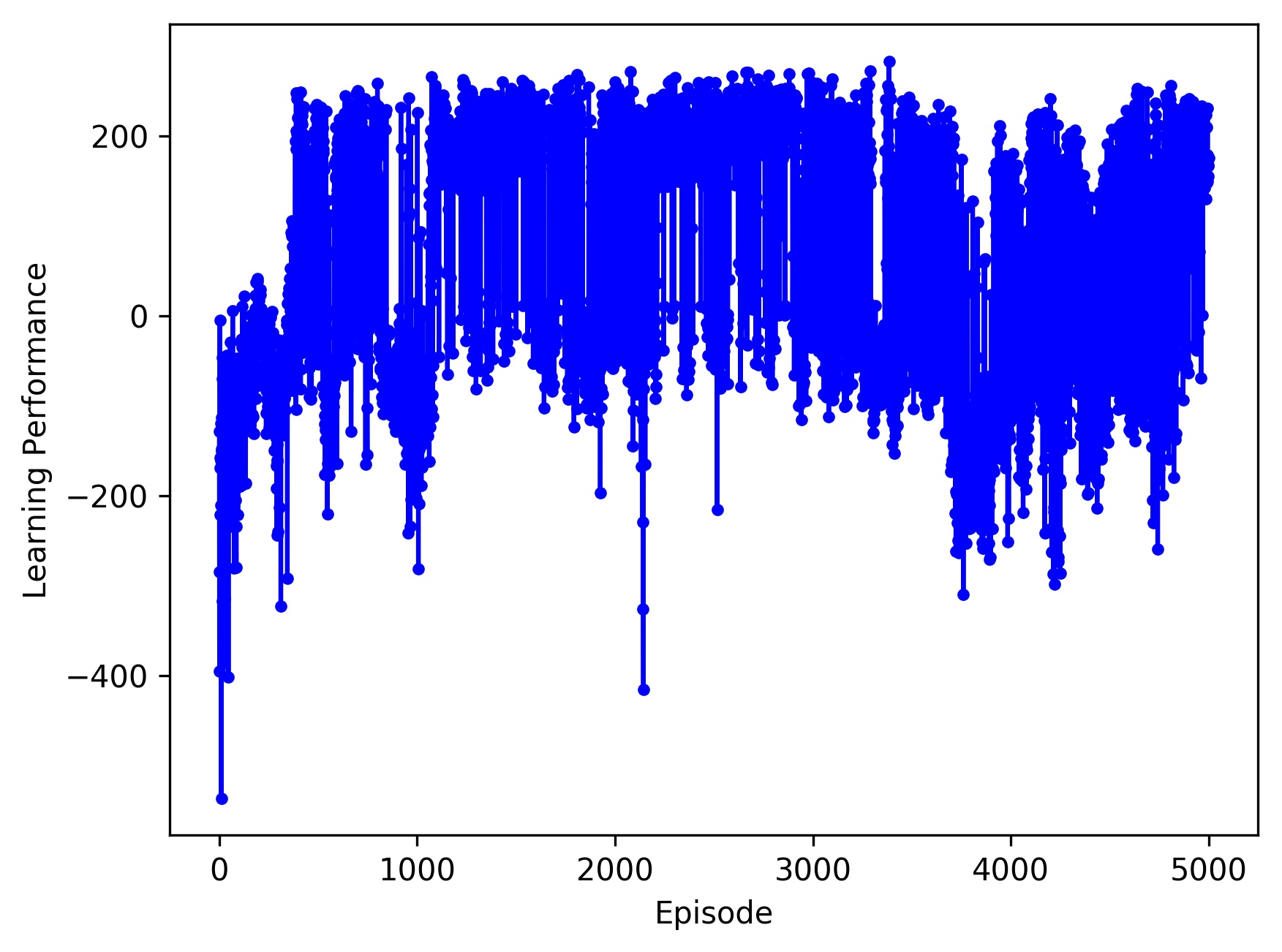 To implement Policy Gradients Reinforcement Learning, I recommended using Tensorflow but not Keras, because you may have to introduce a lot of user-defined loss functions. Some of the customized loss functions could be easily defined in Keras, some of them are not. If you are comfortable with doing gradient descent by yourself, you do not even have to use TensorFlow.

I also tried REINFORCE to solve CartPole and MountainCar Problem in OpenAI Gym.

REINFORCE successfully solved CartPole in a very short period of time. However, it still suffered from a high variance problem (example). After tuning the model, one may get reasonable learning performance without too much variance(example). The code example could be found here.

REINFORCE never solved MountainCar problem unless I cheated. This is because it is extremely difficult (probability is extremely low) to get the top of the mountain without learning thoroughly. The learning agent always gets -200 reward in each episode. Therefore, the learning algorithm is useless. However, if the MountainCar problem is unwrapped, which means the game lasts forever unless the car goes to the top of the mountain, there could be appropriate gradient descent to solve the problem. Alternatively, one could engineer the reward that the API returns. By rewarding differently, say the higher the car goes the more reward is received, the car could easily learn how to climb. However, these are considered cheating because these do not provide any proof of the goodness of the learning algorithm itself.